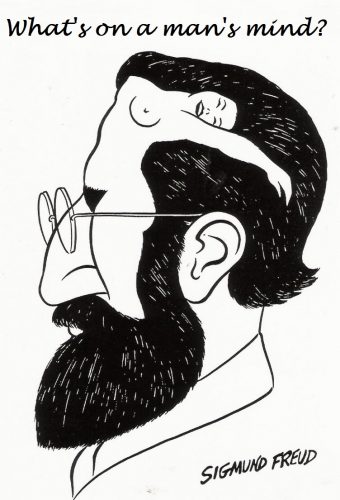 One of the biggest mysteries in the world of relationships is why do us men in serious and committed relationships stray when we can get sex right there in our own backyard.  For those who are fascinated by this seemingly self-destructive behaviour, we could study the work of psychiatrists like Sigmund Freud, who thought it was a symptom of what he called the “Madonna/whore syndrome”. Freud was the pioneer of psychoanalysis and a man driven by theories of unconscious childhood urges lurking just beneath our veneer of social morality. He proposed the answer lay in the way men divided women into two types: the wives and mothers of our children (picture-perfect angels of purity), and the raw, lust-filled prostitutes who were only good for one thing, which was to satisfy our pent-up desires, thus protecting our wives from the unseemly ravages of desire. I suppose the idea of “I don’t wanna cheat” never really came up. The theory went that we chose one type to marry, the other type to have raunchy sex with on the side, and that everyone should be pleased with the arrangement.

Others discuss the desirability of re-visiting the good old days when Freud’s theories held sway. Especially with the pressure-cooker environment we now live in. Is it again time to accept the wonderful social role of the prostitute to ease the stresses of long hours, time-poor recreation and, let’s face it, the general loss of interest that happens with just living together for so long?

Like most people, you may not have considered it very deeply, but a prostitute could be just the therapy you need to save your marriage. With one move, you can avoid the problems of cheating and bring back the sizzle you had in those heady, can’t-keep-your-hands-off-each-other days. The possibilities are endless and both you and your wife could benefit from someone telling you what you could do better in the bedroom by hiring a prostitute to watch you and give you pointers. Like a coach correcting your golf swing. Plus, a little competition in the bedroom will definitely get her wanting to lift her game. A talented, well-seasoned prostitute can correct those small mistakes that lead to big divorce settlements. Once your wife sees all the tricks that drive you wild, that spark will ignite her competitive side and she’ll be vying for your affections like a priest at an altar boy sleepover.

It may even be that your wife doesn’t work, and it’s really starting to set a bad example for your little daughter; this could be the catalyst for seeking “professional guidance”. The last thing you want is your daughter to grow up thinking a man is going to take care of her all her life. You’ll want her to know the value of an honest day’s work. Getting a prostitute around the house will set that great example of a strong, independent working woman for your daughter that she so desperately needs.

So, I think we can look to the past to find a way to navigate the complexities of our modern lives. Thanks to the likes of pioneers like Freud, we can avoid the mental dilemmas about I don’t wanna cheat even though it’s probably hard-wired into our DNA.